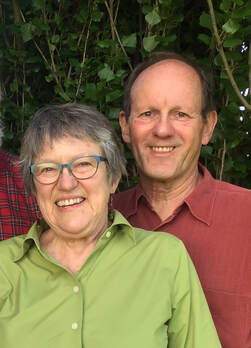 Jerry and Frank
Jerry met and fell in love with Frank during a volunteer trail service trip to Holden Village near Lake Chelan almost 20 years ago. As she approached the “downsizing” part of life, she noticed that options included places limited to seniors or ordinary condos with no guarantee of being a community with some shared values. Then she saw a notice for Skagit Cohousing. As she aspires to live in a multi-generational, diverse community, cohousing is a great option. Jerry retired from a career in urban planning. She enjoys working on the planning and design aspects of Skagit Cohousing.
​Earlier in his life, Frank lived in a shared community similar to cohousing. As he looks forward to downsizing from his large rural property for the next phase of his life, he would like to again experience the benefits of community.  He looks forward to being part of a diverse group that has mutual goals. Sharing common resources and living light on the land are important to him and he believes, to the earth’s future. Cohousing provides a way to live his life with others in an environment of mutual values and respect. Frank is passionate about the North Cascades. He loves natural history, children, gardening, and he volunteer as a trail-builder. 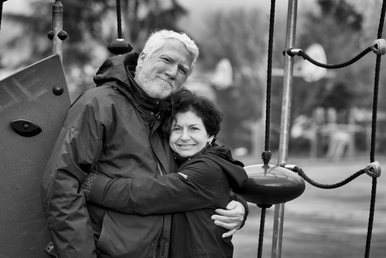 Tom and Marina
Tom and Marina have been Seattle residents since 1992. Originally from Dallas, TX and Cincinnati, Ohio, respectively, they arrived in Seattle after spending seven years in Washington D.C..  In D.C., Tom finished his law degree and worked for a non-profit law firm called Government Accountability Project, while Marina worked for Prince George’s County, Maryland, as a Historic Preservation Planner. In 1992 they piled their 3 year-old daughter into the car and headed to Seattle so that Tom could open a West Coast office of his Washington, D.C. law firm.  They have been in Seattle ever since, raising their daughter Zoe, and son Sam. Tom founded and steers the non-profit organization, Hanford Challenge, which focuses on worker health & safety at the Hanford Nuclear site. Marina is involved in their South Seattle community in a number of ways, and currently works with elders in an assisted living/memory care residential community. Tom and Marina have enjoyed widening their circle of friends and experiences by joining Skagit Cohousing. They are looking forward to moving into this new community they are helping to design. 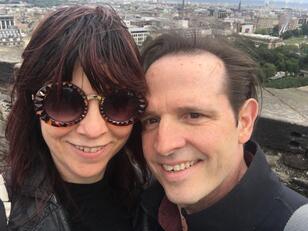 Kathy and Randal
Randal and Kathy have been considering cohousing for some time and we couldn’t be happier that, after much looking, they chose Skagit Cohousing!
Kathy is a musician performing around Seattle and teaching private lessons. While she likes to play lead guitar in rock-n-roll bands, Kathy has also performed musical theater with numerous choruses and in theater settings; she recently played guitar in a theater show at the Edinburgh Fringe Festival in Scotland.
Randal considers himself a dabbler and a team player. He was a small cog in the large Microsoft machine for 17 years and also owned and operated a pub in the Roosevelt neighborhood – Pies & Pints – for 13 years.  We are thrilled to have Kathy and Randal join us! 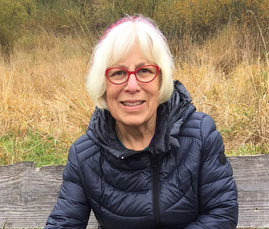 Debra
Debra is a West Coast native, drawn to all of its “big water,” whether the Pacific Ocean, the San Francisco Bay, the Puget Sound, or the Straits of Juan de Fuca. She has lived in Seattle since 1980, and looks forward to moving north to the smaller town of Anacortes.
Debra has worked in maternal-child health for the past 25+ years, first as an out-of-hospital midwife and OB Coordinator at a community clinic and more recently, as a nutrition assistant in the federal WIC program, serving low-income families from around the world. She has also worked as a medical photographer, ophthalmic technician, Metro bus driver and more.
Her interests include knitting, cooking, walking and visiting with friends. She was first introduced to the idea of communal living, when she spent time on kibbutz in her teens and early twenties. The draw of such a community, where individuals intentionally create a neighborhood has always appealed, so she's thrilled to have joined Skagit Cohousing.

Mariana
Mariana heard one of our spots on KUOW radio last summer and jumped right in and became an Explorer. She has been a psychotherapist for more than 30 years and understands the desire for connection and community. She feels a strong calling to the Skagit Valley and to our beautiful site.
Mariana is a gardener, an artist, and a lover of animals and children. She writes poetry, is a voracious reader, loves travel and museums, and has always been in love with Mother Earth. We are so happy to have Mariana bring her vivaciousness to our community. 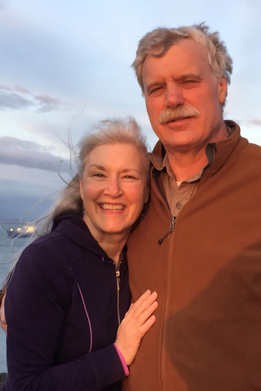 Shelly and Charles
Shelly is a native Washingtonian having been born and raised in Eastern Washington.  In 1979/80 she spent a life-changing year in Denmark, coincidentally at the same time Kathryn McCamant and Chuck Durrett were in Denmark studying cohousing. For most of her career she worked in the CCRC (Continuing Care Retirement Community) industry, but more recently, she has a consulting business, CoVision Consulting.  You can often find Shelly heading out for a bike ride and you can always find her with a knitting project.  Shelly is married to Charles and they share three grown children and two grandchildren together. She is excited about Skagit Cohousing because she truly believes that we are much better together than we are alone. Charles grew up in Delaware and came to Washington with Shelly nearly 30 years ago.  He was drawn to the mountains, the water, and the Eastern Washington landscape. Anytime Charles can get up high and have a view, he is happy and Cap Santé, in Anacortes, is one of his favorite places to hang out.  Charles has experienced living in both isolated areas and hearts of cities and has decided that living in Anacortes is just right.  He’s planning his retirement to coincide with moving into Skagit Cohousing.

Sarah
Sarah was born in NJ and came to Seattle in the late 80's. She’s lived in Seattle, off the grid in Whatcom county, and 8 years on Vashon. She has 2 children, one is 23 and the other is 18, off to college this past August so she is an empty-nester. She works for the employment security department (aka WorkSource) where she instructs a class for people with barriers to employment. She doesn’t know exactly what this next chapter of her life looks like but she’s sure of one thing; she wants to live in community and looks forward to spending more time with Skagit Cohousing folks.

​Milly and Bob
Milly and Bob are longtime San Francisco Bay residents and boating enthusiasts. Last year they decided to bring their boat, “Veronica,” up to the San Juans, in order to enjoy the wide cruising grounds there. Bob had passed through Anacortes several times over the years and always thought he'd like to live there. An ad for Skagit Co-Housing caught his eye.
A year later they decided to apply to be community members. The idea of co-housing speaks to them. They’ve been encouraged by the friendly members and the mix of skills and hard work that goes into a project of this scale. Milly’s professional background is in tax and financial planning. Bob’s is also in taxes, as well as computers and technical instruction. They love to go boating with Gracie, the black poodle. They are avid readers and love to discuss ideas, over coffee or something stronger, or as they walk.

Rose
Rose’s interest in Skagit Cohousing was piqued after meeting some community members at a social event. The very next day she joined an informational meeting to learn more, and immediately became an Explorer. Soon thereafter, she became a member and has participated actively in meetings and other events.
Rose has lived in Seattle for 50 years. She enjoys traveling and hiking and is part of a small improve performance group. She is a retired social worker.
A little-known fact about Rose, she was the first woman driver on the Seattle monorail.  Rose has a great sense of humor and the Skagit Cohousing community is happy to have her. 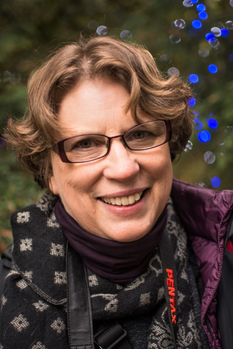 Suzanne
Suzanne was born and raised in Salt Lake City, Utah, but spent years living in Seattle, Ann Arbor, Michigan and Lawrence, Kansas, where her only daughter, now an adult, was born.  Her working career has been in library management from the University of Washington to the Salt Lake County Library System. In addition to getting to see new books every day, one of the things she has loved most about her work is creating welcoming and interesting spaces for people to visit. She loves the Pacific Northwest and is eager to return to join with others in creating a caring and vibrant community in Anacortes.
In her free time, Suzanne serves on a local arts council organizing music and arts events. She sings in a choir, helps immigrant kids with their homework and fosters dogs for Rescue Rovers.  She also hikes with the two rescue dogs she failed to give up.  She loves arts and crafts and has a lot of books and enthusiasms that she would love to share with others. 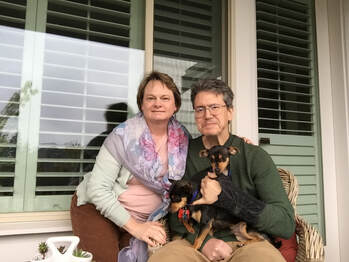 Janice and Alen
Alan and Janice are nine-year residents of Issaquah, WA.  They relocated from Texas in 2010 for Janice’s job as an actuary for Regence BCBS in Seattle.  Janice has since joined Alan in retirement, having launched two kids into college and beyond.  Now they share their home with two cats and two dogs and enjoy gardening, hiking, and volunteer work.  Their goal for joining Skagit Cohousing is to resize their home and enhance relationships with new neighbors. 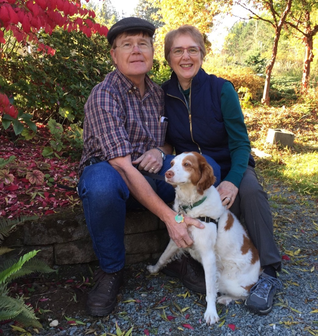 Teri and Bob
Teri was born and raised in Eastern Washington. Bob was born and raised in San Diego, where they met 40 years ago. Bob has worked in the aerospace industry for the past 40 years and Teri has worked at the Everett Public Library for the past 27 years. They both love to read; Bob especially enjoys reading non-fiction and biographies. He also loves to bake bread and pastries and enjoys attending cooking classes. Teri loves to sew and do a variety of crafts. She especially enjoys repurposing felted wool.
Both Bob and Teri love to travel and garden. Currently they have a suburban garden that includes raspberries, blueberries, a fig tree, plum tree and a pie cherry tree. Bob is looking forward to learning to play the ukulele when he retires in a couple of years. They are both excited about moving to Anacortes and having the opportunity to live in a cohousing community.

See yourself living in this community?
Contact us today!